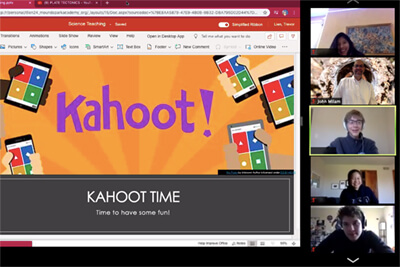 A spirit of innovation flows through all that we do at Mounds Park Academy; now it’s just through high-speed Internet instead of hallways and classrooms. Innovation fuels creative thinking and allows students to experience the joy of learning—and thanks to John Milam’s seventh- and eighth-grade science courses—the joy of teaching.

At the start of distance learning, Milam and his students brainstormed ideas on how best to approach the coming weeks. The students told him that they wanted to become an expert on a science topic—and then teach it. MPA encourages this level of student engagement in their learning, as demonstrated in the blog article “Letting the Students Lead.”

Still, Milam, who joined the faculty in 2019, was apprehensive. While students often present in class given MPA’s commitment to public speaking, they had never before taught a class.

“At MPA, there is a lot of emphasis on student voice,” says Milam. “But I was initially leery of turning over the class to the students.”

Now, Milam is learning new ideas from his students regarding how to make his own teaching better.

“Students at this age know how to talk to Middle School students – their peers – in a different way than I do as a teacher—they know what they don’t know,” says Milam. “As a teacher, watching them teach, I am learning new ways to use innovative technologies that I might not have considered before, including everything from Quizlet Live, Kahoot, and Mapfling to Brain Pop and Survey Monkey.”

Developing Mini-Lessons
Milam teaches science and design to all current seventh and eighth graders, or 71 students. All of them are designing what Milam calls “mini-lessons” in pairs or individually within the grade’s curricular focus. Seventh graders are currently studying human body systems; eighth graders, geology. The students chose from a list of topics or proposed one to Milam. Once that was complete, Milam had to teach the students how to teach.

To guide their development of the mini-lesson, Milam created a framework for the students to follow that included:

During the mini-lesson, the students were the hosts of the Zoom session, managing the platform’s breakout rooms. They were in charge, while Milam observed.

In learning how to teach, Milam’s students now better understand—and appreciate the process.

“Developing lessons is a lot of work, and I take that for granted,” shares Sylvia, one of Milam’s eighth-grade students. “Just creating this 30-minute lesson was quite difficult and took a long time. I have a lot more respect for teachers and their work!”

Using An “Escape Room” To Teach About Pangea
Sylvia and her classmate Ema chose to teach about Pangea, the supercontinent that existed before plate tectonics separated the continents into their current configuration. The topic wasn’t on Milam’s list, but Ema was interested in the subject. Plus, the girls sensed many of their classmates would focus on volcanoes and minerals. The eighth graders had always wanted to work together, and the mini-lesson provided the perfect opportunity.

Sylvia and Ema didn’t want their mini-lesson to “be boring.” They wanted the students to be interested and engaged in the topic. Early in their planning, the girls decided to create an “escape room,” modeled off a similar exercise their English teacher had employed to teach grammar. Their previous science teacher had also used the teaching tool. Plus, both girls have enjoyed their own escape-room experiences with friends.

At the start of their mini-lesson, Sylvia and Ema revealed the escape-room aspect and an incentive for their classmates to pay attention: the first group to break out would receive a “free homework pass.”

The girls designed their mini-lesson based on Milam’s directions that outlined how to build a session and included teaching tips and tricks. In their session, they first explained how Pangea worked and then showed a demonstration. Next, it was time for the escape room in Zoom’s breakout areas, where their classmates had to answer questions. Sylvia and Ema then entered the breakout area to determine the winners. The final piece was to complete a short quiz to assess what the students had learned. Both girls appreciated the challenge of the exercise.

Working Through An Experiment Fail
Like Sylvia and Ema, their classmates Molly and Soumya had never taught a class. They’d done plenty of PowerPoint presentations, but developing a mini-lesson was a completely new undertaking. Molly and Soumya chose their topic—that oceans do not appear to mix—based on a Quiz Bowl question. Both girls are members of the MPA team.

While Sylvia and Ema used Zoom breakout sessions for their escape room, Molly and Soumya used them for students to complete an experiment using water and salt to demonstrate why oceans do not mix. The idea was to pour salted tap water into regular tap water and observe the result. There should be an obvious separation between the two. Molly successfully tested the experiment before the class.

“During the session, it became quickly apparent that the experiment wasn’t working,” says Molly. “So we had to shift to trial and error in the breakout rooms.”

Molly and Soumya directed students who had food coloring to use that to differentiate the salt and no-salt waters. Others tried heating the water before mixing them. Another group poured the water in more gently instead of just dumping it in. Milam let the students problem-solve on their own, enjoying the learning displayed in the process.

“During the lesson, I let them fail and shared with them that it was a good thing because it created an opportunity to knock home the lesson,” says Milam. “Had they experienced failure before the lesson started, they would have known there was an issue and deconstructed it on their own. Instead, the students had to collaborate and problem-solve together, which is a perfect teachable moment.”

In reflecting on their own experience, Molly and Soumya say that they likely did not give enough direction up front before the experiment. Plus, they didn’t consider the fact that their research and preparation meant that they had more knowledge about the concepts than their classmates did. In the end, they determined that the trick to the experiment’s success was having the right amount of salt and pouring the salted water in slowly, instead of just dumping it into the other glass.

“Personally, I learned that we needed to be more specific in our directions,” says Molly. “We thought it went without saying that you would need to mix the salt in the water before combining it with the unsalted water.” Soumya adds, “We also needed to take into account that the students knew nothing about our topic.”

Soumya agrees. “We went first, so we were the example,” says Soumya. “I have enjoyed seeing the presentations of people after us and how they’re improving on what we did.”

Ema and Sylvia also have welcomed the chance to see their classmates in action. Ema appreciated the different paces and the creative tools they used. Some of the presentations were broad in what they covered, while others went into more depth. The approach their classmates took gave the girls insight into their classmates.

“It’s cool to see how their brains work, how they think through things and present the information,” shares Sylvia. “Some of them think in the big picture and others in the details.”

In the midst of an unprecedented global pandemic and the required distance learning, MPA students are demonstrating their creativity, insight, collaboration, and love of learning, fostered by exceptional faculty. Even during distance learning, our small class sizes and connected community are reflecting a warm and respectful learning environment where children thrive.

“Everyone is in isolation right now, so you’re by yourself,” says Sylvia. “But still we’re connected and talking to people, building relationships and friendships. I believe it’s better to see people even if it’s online because it brings a sense of comfort.”