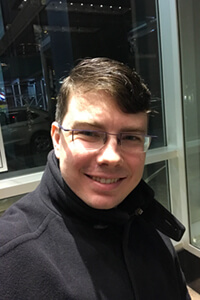 Christopher Staral ’06 attended MPA for Middle and Upper school, and chose to serve on the Alumni Board to give back to the MPA community by offering mentorship in a career field that may be underrepresented and difficult to break into. He is currently the biotech Investment Analyst for Mangrove Partners and is responsible for making investment recommendations as they relate to the biotech sector.

He majored in chemistry and minored in biochemistry at Carleton College, and also performed medical research at the University of Minnesota’s Lillehei Heart Institute during breaks. He then attended the University of Minnesota’s Medical School immediately following undergrad, where he met his now-fiancée, a Minnesota native and investment banker in healthcare. She introduced him to the concept of trying to predict developmental drug program success as a way to value biotech companies, which he began doing during his spare time while at med school. This lead him to New York and pursue a career full-time in finance, starting at Canaccord Genuity in biotech and pharma equity research, and shortly thereafter moving to Goldman Sachs in a similar capacity.

While there are a diverse set of skills that Chris says can lead to success as an investor, a few that he learned during his time at MPA stand out as crucial. “The ability to think for oneself and to be skeptical of arguments that are made on the basis of authority rather than merit; the ability to quickly break down an abstract thesis into digestible, constituent parts and identify the crucial one or two questions that need to be answered in order to evaluate whether the thesis is valid or not; to have the self-awareness to know when your own knowledge base is insufficient to answer a question and seek out the resources that are needed; to have the confidence to know when you are right in the face of challenges to your beliefs that are unsubstantiated, but also have the self-confidence to admit that you can be wrong when new information disproves your beliefs; have an understanding of risk management,” he lists. “MPA was particularly important in providing a sound foundation for all of these points by providing a challenging, intellectually stimulating yet safe environment that pushed students beyond what they viewed as their own limits. Teachers would encourage students not to hang onto beliefs simply because someone told them it was true, but rather understand the facts and reason out for themselves why they ultimately believed (or dis-believed) something. Lastly, MPA’s strong math (and particularly statistics) provided students with the tools needed to independently test and verify hypotheses themselves rather than rely on someone else to tell them what is and is not true. Furthermore, and even more importantly, it allowed students to separate fact from falsity which is a crucial skill becoming ever-more-important in an age where technology has dramatically amplified the ability for those with perverse political incentives to manipulate and obfuscate truth in favor of a story that supports their own self-serving needs.”

Chris’s favorite experience at MPA was when he worked with three other students to pass a law that mandated 30 minutes of organ donation education in driver’s ed classes throughout the state of Minnesota, which came as the extension of a project he worked on in Ms. Conway’s public policy class. The class served as a way to combine many of the skills we learned throughout high school to creatively solve a problem we identified ourselves and effectuate actual change that continues to positively impact the lives of Minnesotans today.