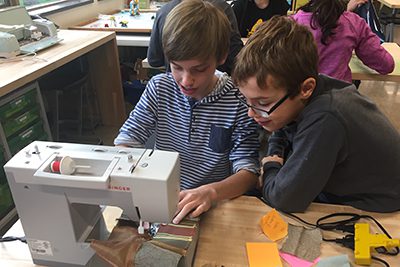 This isn’t your traditional Peter Pan! Twenty-seven Middle School actors and more than 20 students working backstage have been dedicating their time in and outside of school to concentrate on even the smallest details of costume design, set construction, and more. The sold-out production is bringing the community together in creative, challenging, and hands-on ways.

Weeks ago, before anyone knew all the words to “Neverland,” Upper School students started working with Middle School students on costumes for the cast. The kind of imagination possible through this mentorship shows the strengths of our PreK-12 community.

“Our costume crew grew from five to nine people in basically a day, and a few of them are younger siblings of my friends, so it’s cool to get to know them better,” said sophomore Solie Svennevig-Brosi. “I’m excited to make an awesome show with them!”

There is also a crew working on crocodile construction in the Makerspace. Mr. Madigan’s Idea Challenge Advisory has been designing and it for the performances. The students are learning brand-new skills, using everything from sewing machines to papier-mâché to bring the creature to life. They’re coming in during their lunch and recess to mend, fold, sew, and mold the crocodile to life. It is made out of ten different materials so far (pipe, wire, fabric, thread, newspaper, cardboard, foam, tape, wood, papier-mâché adhesive, screws, and plastic) and is big enough for two students to operate on stage.

Mr. Scheweiger, retired Middle School faculty member and MPA grandparent, is also contributing to the magical set of Peter Pan. While it’s being hidden for the surprise element until the actual show, he’s creating Captain Hook’s ship–just take a look in the library to see the amazing things he can do with cardboard!

All of these pieces and hard work will come together during the students’ performance of Peter Pan opening this weekend!