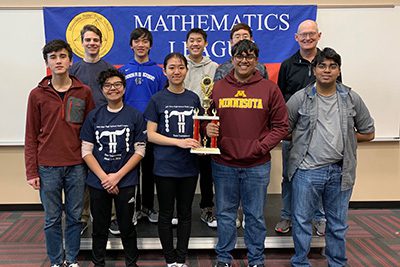 Congratulations to the MPA Math League for finishing second in the state in Class A in the state tournament! Minnesota Valley Lutheran finished in first place and Breck finished in third place.

Coach Ethier also shares that it wasn’t too many years ago that they had trouble fielding a team of eight to compete at the meets, and that this year they had 11 different students who were part of the scoring team in at least one meet, and 18 students who came to most of their meets. “It’s been great to see the growth of our Math League program over the years,” says Ethier.

Juliana Wu, a senior and co-captain of the team, shares similar feelings. “This is the highlight of my senior year,” she said, “It was the first time in four years we went to state. Our team is awesome this year; we work really hard and all share an interest and a passion for math.”