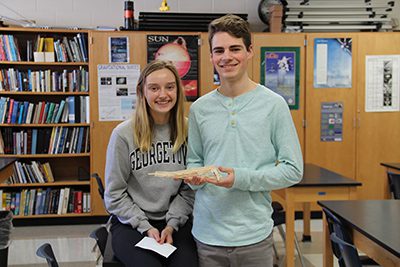 A story of creative risk-taking and turning challenges into opportunities.

Fifteen sticks of basswood, a tube of glue, a bunch of instructions, guidelines, and some hints: these are the only materials given to students in Upper School physics for the infamous Bridge Project. The students have four weeks to build a bridge that will hold the most weight possible and garner votes for craftsmanship, creativity, realism, beauty, and best name, before putting the bridges to the test.

“I’ve been doing it since the mid-nineties,” says Marc Shapiro, Upper School physics teacher. “I do it because it’s a great way to apply things that we have learned during the first semester of physics. It’s a new, different kind of project than any other thing that we do, and we get to learn about structures and forces along the way.”

This year started out like previous years, with the students hard at work on their bridges. After the bridge testing, however, it was clear that something special had happened; two MPA seniors, Gabby Law and Henry Peterson, set an outstanding new record that would go down in MPA Bridge Project history as the bridge that held the most weight. Their bridge weighed 21.05 grams, and held an astonishing 319 pounds, which was 6,900 times its own weight. The previous record held just under 2,400 times its own weight.

The community has taken an interest in the project over the years, with various spectators attending the bridge breaking event. Among these is Chico Hathaway, a professional civil engineer and a parent of two alumni. Hathaway has been helping with the bridge project for several years, and has provided assistance to both the students and Mr. Shapiro.

“The challenge in engineering is always to achieve the best results given the project’s ‘rules’—constraints such as budget, time available, regulations, public concerns, etc.,” says Hathaway. “Gabby and Henry looked at the bridge project rules in a new way and came up with something that nobody expected. I think it’s a great example of how creativity and non-standard thinking can bring surprisingly remarkable results.”

“The goal was always, well, to have a bridge that made Mr. Shapiro create a new rule,” laughed Gabby. “We really cared more about that than breaking any records. We were excited about being able to work on this project together and the more we got invested in our bridge, the more we got attached to the idea and not the grade of the project so much.”

The initial idea came from Mr. Shapiro advising that the students should use a lot of triangles, because they can handle a lot of force. “I turned to Henry,” shared Gabby, “and sort of joked that we should just make a gigantic triangle.” Next on the list of tips the students received, was a point that advised them to think about where the bar should go, which was going to hold up the bucket with the weight. “I thought back to a time years ago when I was climbing a tree and there was a branch that was pretty weak. I figured out that standing really close to the trunk didn’t exert as much strain … So, we wanted to put the bar really as close to the table as possible,” says Henry.

When Henry and Gabby shared their initial idea for their bridge with Mr. Shapiro, his first thought was that it was against the rules (it wasn’t), and his second thought was that it would never work. “But knowing them,” shares Mr. Shapiro, “I thought, ‘Well, what the heck, let’s see what happens. Give it a try. It might be great! Or it might be a spectacular failure. Either way, we’ll all learn something.’”

Their first design ended up being an asymmetrical one, sort of resembling a fish hook. After trying it on the online simulators, however, they soon realized that trying to bend wood in such a way would be a big challenge, so they simplified it. Their second design was very similar to their final one, and they tested their prototype.

“We were pretty surprised at how well it did,” says Gabby. “We started with just filling up the bucket with sand, but eventually ended up running back and forth to the weight room and getting ten-pound weights to stack on top. That one eventually failed in the middle. We were excited because we knew that there was probably something of merit in our design, but we didn’t know how the actual day would go.”

Their bridge was voted by their class most likely to hold the most weight relative to its own weight. This meant their bridge would be tested last. “I was definitely feeling a little more anxious throughout the whole class period,” confessed Henry, “And we had seen some other bridges that did phenomenally well before ours, too, with more traditional designs.”

When it was their turn to test their bridge, however, they found they had to keep adding more and more weight. They ended up putting another bucket on top to be filled with sand, in addition to the one that was hanging below already filled with sand and weights. When their bridge finally snapped under the weight of 319 pounds, Mr. Shapiro performed the calculations and realized Gabby and Henry had broken an incredible school record.

“This project allows students to show a combination of physics knowledge and creativity in a way unlike any of the other things that we do in class,” says Mr. Shapiro, when asked to articulate why he was so proud of Gabby and Henry. “And this is the kind of quality that they’ve shown throughout the whole class … It’s fun to see that they took an idea and developed it in such a way that I never anticipated could be done. Just thinking in a way that I’ve never seen other people think before. It’s very exciting to see people break new ground like that.”

Gabby and Henry credited their MPA education for preparing them so well for this project. “At MPA, I think the teachers do a great job of letting students really come up with new ideas, but also pointing out with their experience possible issues or ways to improve those ideas,” says Henry. “I’ve definitely felt that my ideas are heard, and I can come up with new things, and also see what’s going to be successful and what might not be successful.” He adds that he was proud that as a senior, he was able to show the MPA community how as the leaders of the PreK-12 community, older students can come up with these really cool ideas and be role models for younger students.

Gabby reflected on how what started as a joke, became something much more: “Sometimes a joke or a crazy idea can turn into something really cool, really successful, and really beautiful.” She said that she was proud to share with the MPA community a tangible example of how thinking outside the box can come with unexpected, wonderful results.

To hear the students tell the story themselves, click here.

Mounds Park Academy, a PreK-12 private school in Saint Paul, is currently accepting applications for the 2019-20 school year. For more information about admission and to schedule your tour, visit moundsparkacademy.org/admission. We look forward to getting to know your family!