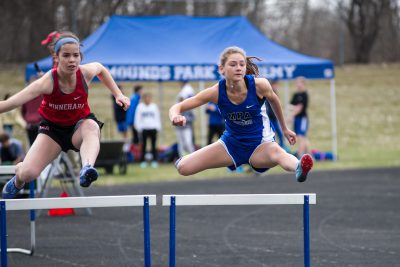 MPA Track and Field athletes opened up the outdoor season strong on a beautiful day at Mahtomedi High School.

On the girls’ side, notable finishes included eighth grader Zoe M., who placed fifth in the 100m dash in her first ever varsity race. Her time of 13.40 places her fourth all time in MPA history in the girls 100m dash and is the fastest 100m dash by an MPA girl since 2002!  Zoe also added a seventh place finish in the 200m, just off the top 10 in a time of 28.27. Eighth grader Greta M. finished eighth in the 200m with a similarly impressive time of 28.35.

In the 3200m run, Sophomore Katie Dahiya ran to a fourth place finish in 12:52.27, running a personal best, and finishing just two seconds from the top 10 all-time list. In the hurdles, Senior Ellie Quam finished fifth in the 100m hurdles in 17.88, and eighth grader Emily B., running varsity for the first time, finished eighth in the 300m hurdles in 55.59. 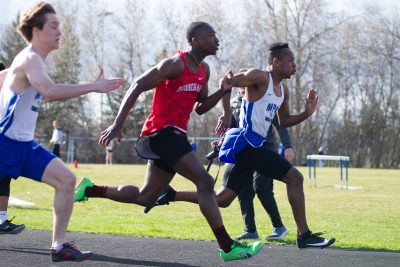 In the 4x800m relay, the team of seniors Gabby Law and Sofia Walker, and Sophomores Izzy Quam and Katie Dahiya placed third in 11:03.98. Scoring in the field events, Greta M. placed seventh in the long jump, jumping 13’9. Junior Cecilia Driano competed in the shot put, recording a distance of 26’0, good for 10th all time at MPA and the furthest MPA girls throw since 2013.

In the field events, Senior Yahya Madar won the high jump with an outdoor debut of 6’4, making the MSHSL honor roll. In the long jump, Junior Kailil Schertzing tied for fifth with a personal best of 18’6, good for ninth best all time at MPA. In the triple jump, Senior Tae’Vion Wilkins placed fifth in 37’8.

Both the boys and girls teams finished in sixth place of eight teams. Nice job, Panthers!