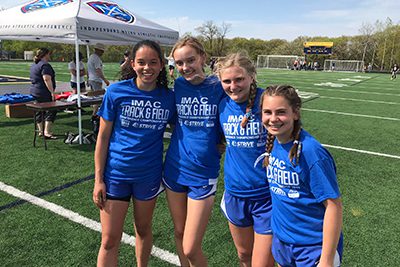 The Panthers traveled to Providence Academy on a warm Thursday afternoon for the IMAC championships. Noteworthy performances on the girls side include eighth grader Zoe M. placing fourth in the 100m dash in 13.39 and adding a fifth place finish in the 200m in 28.02. Eighth grader Greta M. (Gentry Academy) finished fifth in the 200m in 28.10 and fourth in the 400m in a personal best 1:02.28. In the 800m, senior Sofia Walker ran a near personal best 2:26.18 to place second and sophomore Izzy Quam ran a season best 2:33.63 to finish sixth. Eighth grader Emily B. ran two personal bests in the hurdles races, placing sixth in 19.13 in the 100m hurdles and recording another personal best of 55.12 in the 300 hurdles. In the field events, Zoe M. placed fifth in the long jump with a personal best jump of 15.8.75, now third all time in MPA history. 15.8.75 gets Zoe on the state honor roll in the long jump! Junior Catherine Moore placed fourth in the discus throw with a near personal best of 80.9.

In the 4x100m, junior Catherine Moore, ninth grader Ella Fruchterman, and eighth graders Greta M. (Gentry) and Zoe M. place second in a season best time of 53.00, moving up to sole possession of fourth place all time at MPA. In the 4x800m, seniors Gabby Law and Sofia Walker, sophomore Izzy Quam and eighth grader Margo N. were conference champions! They ran a season best 10:21.54, earning a spot on the state honor roll and moving up to fifth place all time at MPA with the fastest time since 2002.

The IMAC Championships are also a great opportunity for our JV runners to shine. Notable JV girls performances include ninth grader Zoe Carver placing second in both the 100m (14.85) and 200m (31.13) and ninth grader Rose Thompson-Nelson throwing a personal best of 25.3 in the shot put for first place. Sophomore Olivia Lantz placed second with a personal best throw of 19.8 in the shot put and then followed that up with second place finish in the JV discus as well with another personal best of 48.2.

In the relays, MPA boys had a trio of third places finishes as well as a conference championship. The 4x100m (Tae’Vion Wilkins, Ian Olson, Caleb Rhodes, and Shane Fruchterman) ran 46.39. The 4x200m (Flynn Opatz, Ian Olson, Shane Fruchterman, and Nathan Harvanko) ran a season best 1:37.14, good for fourth place all time and a spot on the state honor roll. The 4x400m (Nathan Harvanko, Henry Peterson, Matthew Bourne, and Flynn Opatz) ran a season best 3:39.97, seventh all time at MPA and qualified for a spot on the honor roll. The 4x800m (Peter Manolis, Matthew Bourne, Cullen Moore and Henry Snider) were the IMAC champions, running 8:50.00!