MPA Achievements At The Section 4A True Team Meet 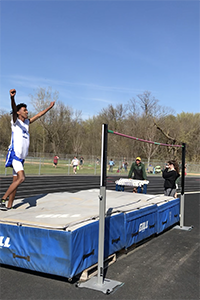 MPA Track and Field traveled to Howard Lake-Waverly-Winstead High School for the Section 4A True Team Meet, and ran, jumped and threw to excellent performances. In a typical meet, only the top eight individuals and top six relays score, but in a True Team meet, every competitor scores. There are 14 teams in Section 4A, and with each team able to put up to two athletes in an event, many individual events included 28 athletes.

On the girls side, eighth grader Zoe M. won the 100m dash in a personal best time of 13.26 and placed second in the 200m in 27.42, which is the seventh fastest time ever at MPA! Eighth grader Greta M. (Gentry Academy) placed fifth in the 200m in 28.04 and won the 400m in a personal best time of 1:02.44, making the MSHSL honor roll and moving up to third place all time at MPA with the fastest 400m since 2007! In the girls 800m, senior Sofia Walker won with a personal best time of 2:26.04, the third fastest time ever at MPA and fastest 800m since 2002! Notable performances in the field events include senior Gabby Law placing sixth in the triple jump with a season best performance of 30’11.

In the boys 4x100m relay, the team of seniors Tae’Vion Wilkins, Ian Olson, junior Shane Fruchterman and sophomore Caleb Rhodes ran 46.82 to place second in a season best and move up to fifth all time at MPA.  In the boys 4x200m relay, seniors Flynn Opatz and Ian Olson and juniors Shane Fruchterman and Nathan Harvanko, placed fourth in season best 1:38.32.  In the 4x400m, seniors Matthew Bourne and Henry Peterson, junior Nathan Harvanko and freshman Cullen Moore ran a season best 3:44.79 to place fifth. In the 4x800m seniors Matthew Bourne and Henry Peterson and freshmen Cullen Moore and Isak Nightingale ran a season best 8:34.78 to place third and earn a spot on the state honor roll. Their time is fifth best all time at MPA.

In a true testament to the strength of the panthers’ teams, the girls placed fifth of fourteen teams with 595.5 points and the boys placed fourth of fourteen with 610 points. The next meet is the IMAC Championship on Thursday, May 16 at Providence Academy.