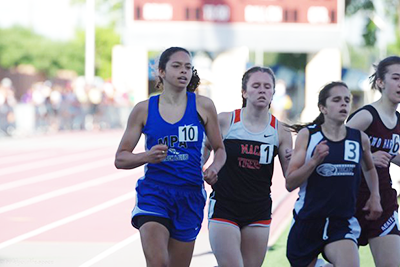 MPA Track and Field went toe to toe with the best competition in Section 4A and emerged with a record number of runners advancing to the state meet!

On the girls side, highlights include eighth grader Zoe M. winning her prelim heat in the 100m, advancing through her semifinals heat, and qualifying for finals, placing fourth with a season best time of 13.17. In the 400m, 8th grader Greta M. (Gentry) advanced to finals and placed fifth, running a near season best of 1:02.81. In the 800m, senior Sofia Walker’s dream of qualifying for the state meet came to fruition, as she won the 800m in 2:26.43, just off her personal best. Sophomore Izzy Quam ran near her season best to make finals in the 800m and finished seventh in 2:34.94. In the 1600m, Sophomore Katie Dahiya earned a medal with her sixth-place finish, running her second-best time of the season in 5:49.26. She added another medal in the 3200m, running 12:26.80 and finishing fifth with a personal best by nearly 30 seconds! She is now fifth all time in MPA history in the 3200m.  In the 100m hurdles, 8th grader Emily B. qualified for the finals running a personal best time of 18.56 in the prelims (now eighth best all time at MPA) and took eighth in the finals.

In the 4x100m, the team of eighth grader Zoe M., ninth grader Ella Fruchterman, junior Catherine Moore and senior Ellie Quam made the finals and placed seventh, running 53.34. They are now sixth all time at MPA. In the 4x200m, the team of eighth graders Zoe M. and Greta M., ninth grader Ella Fruchterman, and junior Catherine Moore. ran 1:52.22 to earn medals with their fifth-place finish.  Their time is now eighth all time at MPA. In the girls 4x800m, the team of seniors Sofia Walker and Gabby Law, tenth grader Izzy Quam and 8th grader Margo N. ran a heroic race to finish second and qualify for state! Their time of 10:05.06 is the second fastest ever at MPA and the fastest in 21 years.

On the boys side, seniors Flynn Opatz and Henry Peterson both ran personal bests and earned medals in the 400m dash. Flynn won his prelim heat and advanced to the finals, placing third in 51.81.  He is now seventh all time at MPA. Henry also won his prelim heat and advanced to finals, placing sixth in 53.25, just off the top 10 all time. In the 3200m, Junior Henry Snider ran 9:50.93 to place second and qualify for state!  He battled against four other talented runners in the lead pack and made a bold statement with his new personal best. In the 110m hurdles junior Charles Grimes qualified for finals and placed eighth with a time of 18.83, moving him into fifth place all time at MPA in that event.  Senior Dylan Dickinson also earned a personal best in the 110m hurdles, moving up to seventh best all time at MPA with a time of 19.12. In high jump, senior Yahya Madar repeated as Section 4A Champion, jumping a lifetime best of 6’8 and setting a new Section 4A record.  He has now qualified for the state meet in each of his three seasons.

In the 4x100m, the team of seniors Tae’Vion Wilkins and Ian Olson, junior Shane Fruchterman, and sophomore Caleb Rhodes and ran a season best 45.89 to place fifth. Their time moves them into third place all time at MPA. In the 4x200m, seniors Tae’Vion Wilkins, Ian Olson and Flynn Opatz and junior Nathan Harvanko showed off their hard work this season by running 1:33.77 and demolishing the school record by over a second! They placed third in the finals, and after the second place team was disqualified, they qualified for the state meet!  In the 4x400m, seniors Tae’Vion Wilkins, Henry Peterson, Flynn Opatz, and junior Nathan Harvanko earned medals with their fifth-place finish, running a season best 3:38.80, fifth fastest all time in MPA history. In the 4x800m, the team of ninth graders Isak Nightingale and Cullen Moore, junior Henry Snider and senior Matthew Bourne ran their season best 8:22.04 to finish second and qualify for the state meet! Their time is now fourth best all time in MPA history.