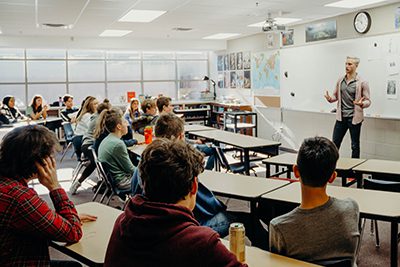 As a recent graduate of the University of Utah’s Entertainment Arts and Engineering program, MPA Class of 2015 alum Logan Erickson has a lot on the horizon. From designing games with Octothorpe, to leading the design and development of neurological rehabilitation assessments and training at Stronger Brains Inc., he is making an impact and inspiring others to do the same. One of Logan’s recent projects was developing a game in which the user enters the world of Sherlock Holmes as a Baker Street Irregular–coincidentally, MPA’s 2019 Middle School Play, Sherlock Holmes: The Baker Street Irregulars, allowed for the same experience!

Logan was invited by his brother Hunter, a current MPA junior, to visit campus and speak to the Upper School Entrepreneurship Club. Since he was seven years old, Logan has been creatively finding ways to pioneer his own small businesses. As a Middle School student, he established his first enterprise by selling handcrafted figurines–a leap he took that still echoes his ambitious spirit to this day. It eventually led him to the Lassonde Entrepreneur Institute at the University of Utah, where he helped friends with their own small companies. In turn, he realized how much he enjoys building them himself.

MPA students had many questions for Logan about the trajectory of an entrepreneurial career. He responded with examples and stories of why, in fact, it will not always be linear. While Logan told the group that his work is everything he wanted to do since he was a student at MPA, he also made a point to share that he had to take unexpected paths, like working as a radio host without any broadcast experience. He also credited MPA for many skills he used to get him where he is today, including preparedness for college, how to grow from missteps, and how to use criticism for success. He left the students with some very succinct, yet compelling, advice–to take the leap when they inevitably encounter it, and to use the skills that MPA is teaching them as their superpowers.