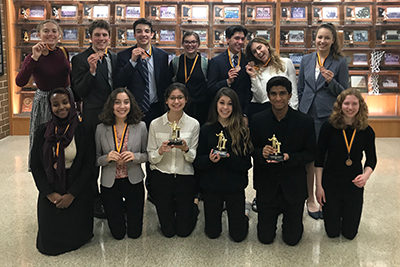 Congratulations to the MPA debate team on an excellent performance at the final regular season tournament of the year! At the Mankato East Classic Debate Tournament, the team amassed a record of 40 and 24, and seven teams won awards.

In Novice B, Freya Rahm and Emilia McLaughlin were third. In Novice A, Jenna Sherwood and Dhruv Muppidi continued their undefeated streak of 16-0 and finished second behind another 4-0 team, and the team of Lily Gasterland-Gustafsson and Elissa Frankel received medals for a 3-1 finish. In Junior Varsity, the teams of Fiona Blank and Anna Gaudio and Kaija Kunze-Hoeg and Misk Khalif received awards for their 3-1 records. Finally, in Varsity, the teams of Ryan Ghose and Elli Carlson and Garrett Hollihan and Charlie Galicich received awards for 3-1 records. MPA’s 80th debater also competed this weekend to confirm the team’s status as a true juggernaut. Go Panthers!