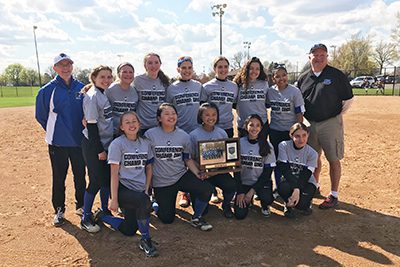 Congratulations to the MPA Girls Softball Team for winning the 2019 IMAC Conference Championship! This is the first championship title to be won by MPA’s softball team in school history. This year’s team composition has been tremendously successful, as it features a variety of grades and even a few players from Gentry Academy, who MPA has a co-operative partnership with this year. There are two seniors, four juniors, six eighth graders, and three students from Gentry Academy. All the players showed a commitment to the team from the beginning, such as eighth grader Siri S., who chose to play on MPA’s team along with her traveling softball team.

“The wide range of ages, along with the partnering of two schools, make logistics (practice times, game times, early dismissal and transportation departure times) somewhat challenging,” says Dan Haase, one of the coaches and director of athletics at MPA, “This group, however, has responded well to these challenges. Team competition and expectations have skyrocketed with our early success. The girls respect each other and support each other, which creates a fun team atmosphere and makes coaching even more enjoyable. I’m so proud of their success thus far and look forward to the continuing competition and athletic growth, both this year and in the years to come.”

Congrats on this incredible success, Panthers!