Hate Is A Virus 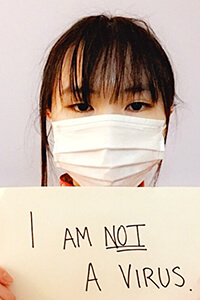 The MPA Upper School Asian Culture Club, Social Consciousness Club, and Racial Justice and Equity Club met on Zoom to discuss how the language around COVID-19 can produce hate and racism. Students had the opportunity to share personal reflections anonymously, and the conversation will be a part of a continuing ‘series’ on the social and political impacts of this health crisis and a broader effort to document their responses. In this blog post, MPA senior Amanda Khouw shares how she is working and speaking out to eliminate stereotypes and misinformation.

Hate is a Virus.

COVID-19. The most recent pandemic of the 21st century. Who knew we would be living in a time of crisis? Not only does the virus spread fear and anxiety, but it also spreads racism. Lots and lots of racism. I would have never thought there would be a time that I would be scared to let my parents go out for daily groceries or even just outside to take the garbage out.

I grew up Asian-American. Normally, we do not discuss about our Asian race issues. Perhaps this may have stemmed from our cultural perspective of “keep moving forward” and “work hard for our elders”. There was not that much time for us to really talk about the racism that we have faced. I grew up with friends thinking that I eat cats and dogs. I grew up believing that I HAVE to be good at math. I grew up with the shame of being who I am–a Chinese-American.

**However, I must clarify that I am not like a typical Chinese-American as my parents do not speak Mandarin and they grew up in Indonesia instead. I would be classified as a Chinese-Indonesian, but that would leave the fact that I am Chinese-blooded and that I am an American citizen.

I speak out because of the stereotypes and misinformation that has been stirring up in our media. I cry out because so many injustices have been done and yet, why are we sitting still? Why is it that we are being quiet about these issues as Asians and as non-Asian descents? Is it because Asians tend to “have it better” than other racial groups?

I cannot emphasize enough how frightened I am. Not only do I have to worry about my own health and the potential spread for others, but I also have to be cautious about my skin. My East-Asian eyes. My skin color. Me.

Why haven’t we spoken up when there was a confirmed hate crime of the stabbing of a 2-year-old and a 6-year-old alongside with their father? Why haven’t we talked the acid attack on an Asian woman that was simply just taking out the garbage that was only two steps away from her front door? I am enraged. I am devastated. I am confused.

To combat and speak out about this rise of xenophobia, I have shared a post with this caption:

At the start of the coronavirus outbreak, there were already instances of racism towards Asian people, especially those of Chinese descent. I saw it coming. People made jokes about how the cats and dogs in Asia are happier now that there will be no Asians left to eat them. People made suggestions about not visiting Chinese restaurants because they were convinced that the food was “infected”. People made memes about the Chinese or Asian students coughing in class. This was just the beginning.

As the COVID-19 virus began to spread worldwide, so has the rise of xenophobia. Many more people were beginning to be scared of those of Asian descent, despite the fact that some may have never even stepped into the city of Wuhan. It did not make any sense to me as to why people are doing this. And it still doesn’t.

“Why do Asians get a hotline for hate crimes but WE don’t?”
“This is a punishment for the Asian people because they eat weird stuff.”

This is what I hear from other people of different ethnicities.
People tell me that I’m not alone in this.
But why do I feel alone?

I don’t understand. why do people believe that Asians who are experiencing this “now” is “not special”? Is it because other minority groups experience it every day? Why are we comparing the “levels of racism”? Are there even any levels?

The exploitation of Chinese laborers for railroads.
The Chinese-exclusion act.
The internment of Japanese-Americans.

I am very grateful for the amount of support I have gotten from my peers, MPA teachers, family, and even mere strangers. I have received an overwhelming amount of shares and comments that I cannot stress enough about how thankful I am. I no longer feel as alone as I did back then. But I will continue to fight the injustices. And I hope many others will fight alongside with me.

Thank you,
Amanda Khouw
Class of 2020