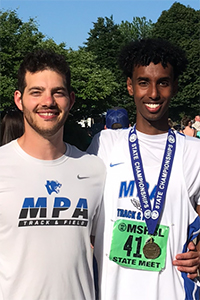 MPA Class of 2009 alum Nate Bander is MPA’s admission outreach coordinator and Upper School admission coordinator at Mounds Park Academy. He also coaches boys basketball and the varsity track and field and cross country teams at MPA. After attending MPA K-12 and the University of Minnesota, where he majored in Communications Studies with a Spanish Studies minor, Nate moved to Baza, Spain and worked in an adult language academy as an English teacher.

“The single biggest impact that my MPA experience had on me was inspiring me to learn about the world. MPA is a wonderful, diverse community of parents, students and educators who place a high value on education. I feel prepared to speak about the greater world, travel to faraway places, digest complex theories and thrive as a global citizen. MPA connected me to the broader world.”

But Nate’s MPA moments did not stop as a student and alumni. In fact, he didn’t make one of his fondest memories until coaching in 2019.

Nate recalls, “I first met Yahya Madar (Class of 2019) when he came out for my ninth grade basketball team. That season, I benched him in a game and he almost quit the team.” But, Yahya persevered and in 10th grade, he came back out for the basketball team. He also tried high jumping in track and field for the first time, and something clicked.

In his fourth meet ever, Yahya had a 4-inch personal best, cleared 6’2 while fasting for Ramadan, and qualified for state, where he finished 11th. As a junior, Yahya nearly led MPA to state in basketball, injuring his ankle in the Section Finals, and missing some of track season. When he returned, he set the conference record, clearing 6’6 and ended up fourth at state. In his senior year, he earned a captainship in basketball, set our single game points record with 41 and ended his career with nearly 1000 points. He entered his senior track season with high expectations. At a lifting session before the season, Yahya and I wrote 6’10 on a piece of paper and taped it the squat rack in the weight room, indicating his goal for that season. I have to admit–I was skeptical. But, after a slow start to his season, the Madar magic started to come alive. He set a new PR of 6’7 at true teams, then followed it up with the Section 4A record of 6’8.” Then came state.

“I will never forget what Yahya did at the 2019 state track meet. With three jumpers left, he cleared 6’7 for only the third time in his life. Then, he cleared 6’8 like it was nothing. And when the other jumpers failed to clear 6’8, Yahya won the State High Jump Championship. As a senior. On the same day he graduated high school. It’s impossible to capture what that moment felt like but I’m glad I was wearing sunglasses to hide some very real tears.”

And Yahya didn’t stop there. He cleared 6’9 heroically on his third attempt and then 6’10 on his first try, tying the 38-year-old Class A high jump record and achieving his goal posted to the weight room wall on that cold winter day.

“When it was all said and done, only a handful of high schoolers jumped higher than Yahya in the United States this year. With school, conference, section, and state records, Yahya, you are truly one of the greatest of all time,” Nate said. “Athletics is a great way to connect past, present and future panthers and I support MPA by instilling in my athletes a sense of pride in themselves and their school.”