Finding A Home: The Roseth Family’s Journey To MPA 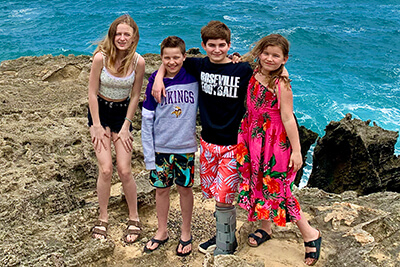 How did your family discover MPA? Maybe you saw a billboard or heard an ad on Minnesota Public Radio. Perhaps you read an article about an MPA athletic team, or searched on Google. But for almost 80% of families, finding MPA meant connecting with someone already within our community like a friend, a neighbor, a colleague, or a family member.

For the Roseth family—parents Aaron and Anna, sixth grader Ari, fifth grader Andrew, and third grader Annika—who started in the fall of 2020, discovering MPA began with a bumper sticker on a teammate’s minivan at football practice. That teammate was Dylan Rengstorf, whose sister Emma, attended MPA. Ari and Dylan became fast friends and so did their families.

Shortly before meeting the Roseth family, Jason and Joana Rengstorf had chosen MPA after looking for a school where Emma could thrive in an inclusive place that provided a safe environment for her to excel as a student. When they found MPA, they knew it was the right fit.

Since becoming MPA parents in 2016, Jason and Joana have been great ambassadors for MPA, sharing their love of the school with friends and neighbors in their community. So when they heard of the Roseth family considering a change, they sprang right into action. “When Aaron (Roseth) mentioned to me that they were planning to send their kids to private schools, I shared what an amazing school MPA is and what a quality education our family is receiving,” said Jason Rengstorf.

It was clear to the Roseth’s right away that MPA was made up of other families, like the Rengstorf’s, who shared their values, and whom they wanted their children to be around. “Jason Rengstorf has been a huge influence on our son Ari over the years, embodying what it means to be a great coach,” said Aaron Roseth. “He exemplifies how to push children while being empathetic to their development.”

Little by little, the Roseth family learned more about MPA, asking Jason and Joanna about their experiences. “We talked to Aaron and Anna about how much attention our kids were getting from their teachers and how inclusive the community is,” said Jason Rengstorf. “We also talked about the quality of the education and how incredible the teachers are at working with the students and differentiating within each subject.” 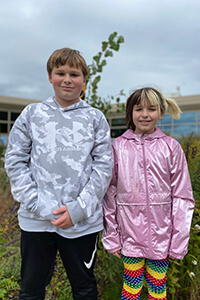 With Jason’s prompting, and a conversation about the “MPA Way,” the Roseth family scheduled a tour and immediately knew they had found something very different than what their children had been experiencing at their neighborhood school. “We started to look at private schools for our family. Our oldest daughter is very good student and fortunately very adaptable to learning styles and outside distractions. But even she shared with us throughout her eighth grade year while in a public middle school several stories about terrible teaching, lack of empathy from staff, and a school environment that seemed very toxic to child development and learning,” said Aaron Roseth. “During this process we realized how prevalent this was in the district and we quickly decided to look for a new school for all of our children.”

At the same time, the Rengstorf family was also in the midst of considering a change for their son Dylan, who was not yet at MPA. They searched for a school where Dylan would shine in small classes and take advantage of one-on-one direction and help. Though unsure about switching schools at first, the prospects of going to school with Ari inspired Dylan to take the leap. “When Dylan found out that he got in to MPA, he was extremely happy and put on an MPA shirt immediately! Now he talks about how it’s the best school in the state and how he’s very proud to be a part of the MPA community,” adds Jason Rengstorf.

In the end, it was the community feel and desire to surround their children with other likeminded families that truly persuaded Aaron and Anna Roseth. “All of the characteristics of Coach Jason were the same value system characteristics that we felt and have now found in MPA. MPA seems to know when to push children, how to enlighten and open their intelligence, how to be inclusive of everyone, and how to redirect children’s temperamental behavior to learning. Even better, they always having fun doing it,” says Aaron Roseth. “We made the right choice joining the MPA community. We are forever grateful to Coach Jason for his direct and indirect influence on our family and to the Rengstorf family for their recommendation of MPA!”