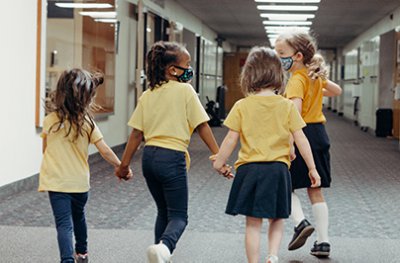 As human beings, we are social creatures: having a sense of belonging is a central need. COVID-19 restrictions and safety considerations combined with increasing political polarization have deprived too many people of being connected to each other and feeling part of a community. At Mounds Park Academy, all of us have been working extra hard at building community because we know just how important it is for our health and well-being—and that of our children.

Building community across cultures, beliefs, economic backgrounds, and other points of difference can be challenging and requires open-mindedness, patience, empathy, and understanding. Many children have an immature way to create a sense of community. Too often they connect with the idea that “If I am nice to you, and we are mean to everyone else, then we are connected.”

Uniting in the exclusion of someone else is the easiest way to feel connected. The lack of connection and sense of belonging in the broader world right now is fueling this behavior in grownups. We see it in the tribalism around masking and vaccines and the vitriol spewed in public and online forums across the country. Watching what is going on at school board meetings across the Twin Cities and the country reminds me how grateful I am to work with MPA!

Flight-or-flight reactions increase during times of fear and uncertainty
When we are in conflict with someone, our brain gets stressed and processes information in the most primitive part: the amygdala. The amygdala acts as a manager, assigning emotions like fear or anger to environmental stimuli and triggering the flight-or-fight response. The stress hormone cortisol is released, making us more impulsive, less thoughtful, and often more angry.

Tim Phillips, the founder and CEO of Beyond Conflict, a non-profit organization that works to address conflict and promote social change in the United States and abroad, created a TED Talk called “The neuroscience of social conflict.” In the 2015 talk, Phillips described what happens in the brain when people criticize beliefs we hold close. He argues that when our most important beliefs are under threat by the most important beliefs of others, it leads to conflict, and we often lose the capacity to be rational. This situation leads to fear and throws our brain into a state where it is hard to be empathetic; it is easier to be angry.

Across the country, children are seeing grownups in the news, on social media and in public disagreeing and hearing them use disrespectful language. Social media feeds are filled with interactions that are rude and often posted in a way that is meant to be funny. TikTok is flooded with parent-filmed videos of children having tantrums with captions of things like: “All I did was say they couldn’t eat their candy now.” The emotional reaction on display is shared in a playful-but-mocking way to make light of the moment. These playful-but-mocking images are confusing to child and adolescent viewers and give some the sense that it is okay to connect socially by mocking others, even those too vulnerable to defend themselves.

As human beings, we can call upon our more evolved brains and react differently to fear and uncertainty. We can focus on empathy to help reduce these emotions. Modeling this behavior—reacting with empathy to uncertainty instead of fear and anger—is helpful for children now and in their future. This will help us and our children learn to better connect with others and meet our basic need for belonging. To do this in a healthy and productive way, we need to tap into our higher level brain function.

Here are some recommendations for how to do just that when fear and uncertainty are pervasive:

Practice controlling your anger and model it for your kids. When anger comes, talk about it. Say, “What you just said is making me uncomfortable and angry.” When you let the anger overtake you, you react impulsively and limit your own options in the future.

Recognize that you can be angry and be okay. Anger is a natural human emotion. It is what we do when we are angry that matters. When we pause, we can call upon empathy, calming ourselves to allow for the rational side of our brain to kick in.

Avoid exposure to conflict that is rude, divisive, and disruptive. To protect yourself and your children:

Be a good role model, as kids are watching and modeling what they see. When you are having a conflict, have a reasonable conversation. Show the other person that you respect them as a human being. 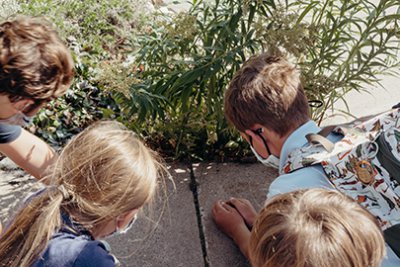 Know that cranky and angry behavior in adolescents can be a sign of depression. It’s natural for students to be tired, cranky, and angry during the first few weeks of school as they transition to a new routine and adjust to being in school. Their impulse control mechanism is overtaxed and their ability to manage is challenged. As school continues, their crankiness and anger should dissipate. If it is not getting better, it may be a good idea to reach out to a professional. Or if your child is not normally an angry child, and anger is a brand new feature, it might be a good idea to speak to a counselor. This is particularly true for middle school students.

Avoid posting videos online that mock or belittle kids who are reacting to a situation with big emotions. Those videos teach lessons to children that are not helpful. Little kids do not “get” the irony. When they see a big strong emotional reaction—and people find it funny—it confuses them. Another adult will get the intention of why it was posted, but belittling strong emotions is a poor lesson to teach a child.

Call upon your empathy and make a point to include, rather than exclude, people—and encourage children to do the same. Fulfill the need for connection in a positive way.

Perform benevolent acts, as they build empathy toward others. Donate blood, help out a neighbor, donate to the local food shelf, and practice daily acts of kindness—and let your child know what you are doing. You can even tell them that it is how you are dealing with rising feelings of anger and frustration and your intention toward connection.

As a society, we need to work together to reduce anger, build connections among each other, and find our empathy or we will be on an unhappy path forward. I encourage each of us to uncover ways to build positive connections on a daily basis and take a deep breath when your amygdala is on overdrive, attempting to get the best of you. Only together, can we lead ourselves toward connection.