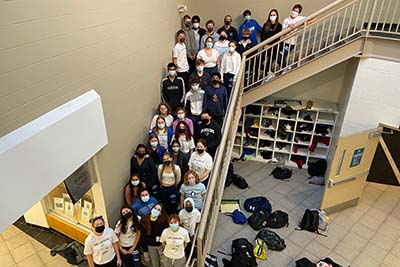 Congratulations to the MPA debate team on a wonderful performance at the Classic State Debate Festival. 42 students represented the school, and Mounds Park Academy received the second-place team sweepstakes award. This award is based on the top two performances across each of the three divisions of competition – novice, junior varsity, and varsity. It’s a testament to the depth of the team. 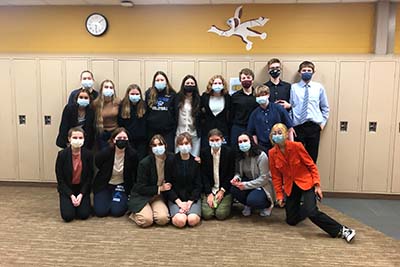 The varsity division is called the Minnesota State High School League Classic Debate State Festival, as the MSHSL sponsors the awards for this event. Before we get to the team results, we want to applaud two seniors who were recognized with all-state debate honors for their excellence over the entire season: Charlotte Bergh and Ruby Schwieger. In team competition, MPA had a strong performance. The team of Kaija Kunze-Hoeg and Jenna Sherwood broke to the quarterfinals, where, because of seeding, they had to debate their teammates, Charlotte and Ruby. The judges commented that it was a good round, and Charlotte and Ruby advanced. In the semi-finals, Charlotte and Ruby defeated an excellent team from Eastview High School, and in the finals, Charlotte and Ruby also debated well against another fine team from Eastview, finishing as the runner up.

A special thank you to all the alums who judged and coached for the team this season. In particular, Meg Wilkening ’18 and Elli Carlson ’20 deserve special recognition. These two alums were outstanding debaters and returned to the team to give back to MPA in ways that are hard to capture in words. This season, they coached over 100 students through the rigors of debate, teaching about research, speaking, and writing. We are fortunate to be the beneficiaries of their patient brilliance.