MPA At The Harvard Speech Tournament 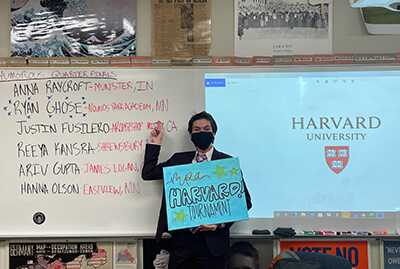 MPA Speech participated in the Harvard Speech Tournament for the first time this weekend, and the team’s run went all the way to the Quarterfinals! Senior Ryan Ghose made it out of preliminaries, into Octafinals, and into Quarterfinals in a preview of this year’s National Tournament. The category in which he made it to Quarterfinals is Humorous, and he was also next out in Dramatic Interpretation. Seniors Salmah Elmasry and Emma Cohen also competed, placing in the top half of their fields of more than 300 other students.

Students from approximately 450 schools and 46 states competed. In Ryan’s Octafinal and Quarterfinal, he competed against students from Marjory Stoneman Douglas High School in Florida all the way to James Logan High School in California. He finished thirteenth overall. Congratulations to our team!