A Peek Into The MPA Robotics World 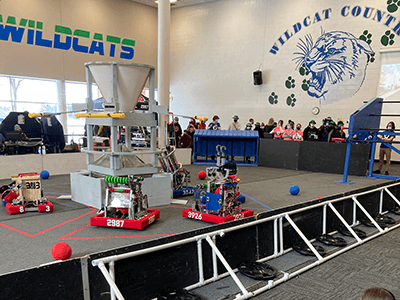 If you’ve been in the Lansing Sports Center recently, you’ve surely seen the large wooden structure on Court 4. Maybe you even saw Michael Wilke ’16 working on it. The curiosity some people had about the structure made me overcome my reluctance at sending all employee emails, in order to compose this description of what the MPA Robotics team is about.

FIRST Robotics is an international organization headquartered in New Hampshire. It has four levels, starting with FIRST LEGO League (FLL) for elementary schoolers, all the way up to FIRST Robotics Competition (FRC) for high schoolers. At MPA we have only an FRC team. Per capita, Minnesota has one of the highest participation rates in the U.S. There are more FRC teams in Minnesota than varsity hockey teams!

Each year, we are given a new “game” and a limited amount of time to create a robot to play the game. The robot must be designed, built, programmed, wired, and tested under strict constraints. A new robot is built every year; the game changes so much that there’s nothing from the previous year that is useful, other than possibly a drive chassis. With their batteries and bumpers, robots can weight up to 150 pounds. Teams are aided by adult mentors who are volunteers from the community, but the students have ultimate responsibility for designing, building, and operating the robot. Students can go the technical route and learn about building, coding, electronics and controls, computer-aided design, or using a CNC router, or several of these. They can also choose the non-technical path and work on such things as fundraising, marketing, outreach, and social media. Our team has Twitter, Instagram, Facebook, and a still-under-renovation website. We are like a small business, and have to raise all our operating funds; our budget for this season is $24,000. 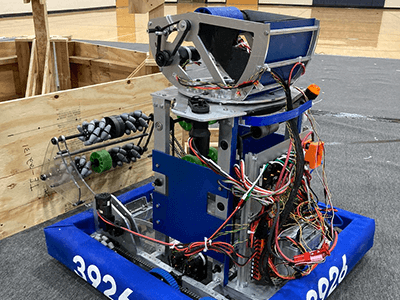 Competitions are big events. The official regional events take place in large arenas. This year, for the first time, we are able to compete in two regionals: one in Duluth (March 2-5), and one in Minneapolis (April 6-9). The Minneapolis Regional takes place at Mariucci Arena, where the hockey Gophers play. There will be 50-60 teams there from all over the region, although mostly from Minnesota. Across the street, at Williams Arena (basketball arena), another competition with another 50-60 teams will occur simultaneously. There are no divisions for big and small schools; we compete against large public schools with lots of resources and mentors, and schools from small towns that are able to utilize the knowledge of every engineer in town to help them. Every adult I have ever invited to these events, upon seeing it in person, has said the same thing in virtually identical words: “I had no idea it was this big, and I had no idea it was this cool.” These events are free and open to the public (hint, hint). They are also livestreamed.

Nicole Koen started MPA’s team in the fall of 2011, and I came on as coach in 2014. Nicole, Hannah Sullivan, Ariel Kitch, and John Milam have all served as coaches as well, and now Michael Wilke ’16 (jr.) is the assistant coach. We are called the “MPArors,” pronounced “emperors,” which is why our mascot is a penguin. Many teams’ names are related to their school’s mascot, but not all, so it isn’t completely surprising that we aren’t the “robo panthers.”

I love this program because of what the students get out of it. Once they get involved, many become very passionate about it. Many would tell you that they love being on the Robotics team. It’s not just the technical skills, for those who go that route; it’s also the “soft” skills such as teamwork and collaboration that this program emphasizes. In the end, they accomplish an extremely difficult task, and they are legitimately very proud. But as the founder of FIRST, Dean Kamen, likes to say: “We don’t use kids to build robots; we use robots to build kids.”

Everyone in the world learned about this year’s game, Rapid React, at the same time when we watched this two-minute video on January 8. Since this doesn’t provide nearly enough information about the game, this 130-page manual was released immediately after the video aired. The manual contains details about scoring, game rules, robot specifications, field dimensions, and lots more in excruciating detail.

So what was that giant wooden monstrosity on Court 4? It was a plywood version of the “hub,” the goal into which we will shoot at our competitions. Teams are given plans so they can build a version of it for practicing. (The competition version will be built out of aluminum and polycarbonate, able to withstand the pounding of robots driven into it repeatedly.) The hub took about four students and one adult mentor, working every day for a couple hours or more, roughly three weeks to build.

If you’ve read this far, you may want to check this out. This 15-minute video shows some of the program’s history, excitement, and values. It also gives you a feel for the size of these robots and the nature of the competitions. 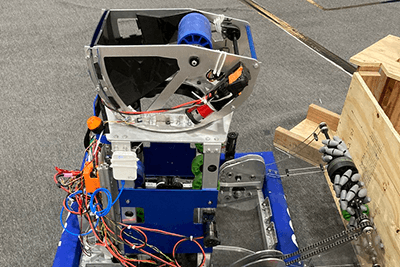 The pictures here are of our robot at MPA on Friday, and also at a practice event we attended at Eagan High School over the weekend. Don’t look too closely at the wiring; that rat’s nest would not be allowed at an official competition, and cable management will be improved dramatically before our Duluth event in 1.5 weeks! You can see the “intake” on the front of the robot to bring in “cargo,” the “elevator” in the middle to carry the cargo up, and the turreted shooter on top. The turret is designed to be able to spin and to adjust the shooting angle, so we can shoot successfully from any place on the field. However, we have a long way to go before it is operational, as both mechanical and code issues must be solved. We are also planning on adding a climber to the robot before Duluth. The third picture shows us at the Eagan event with robots from Park of Cottage Grove, Farmington, and Apple Valley also practicing. (We are team 3926.) This video shows us practicing at Eagan on Sunday, February 20. You’ll see our robot shoot autonomously at about 12 seconds. At 15 seconds, drivers take over, picking up blue cargo and (unsuccessfully) shooting them. Our shooter needs just a wee bit o’ tuning.

As coach, I would like to say that I know more than the students and teach them all this stuff. That is very far from true. With so many moving parts to this program, I am basically the program administrator. While I do turn a wrench on occasion, my job right now is to set the tone, help the team organize and set goals, guide them in thinking like engineers, communicate to the parents, help to make contacts and raise support, order the supplies, keep track of finances, organize logistics for competitions and other events, and generally do most of the overarching tasks. It sounds like a lot, and it is, but as I wrote above I am grateful to do it because of the benefits gained by the students. This is an amazing program! I would like to gain more technical knowledge, but I don’t have time. The students teach each other, and the other adults teach them as well. As is common in other fields, robotics teams adopt the mantra “See one, do one, teach one.” Michael Wilke is invaluable, as he knows about every technical thing we do: code, CAD, CNC, build, electronics. And he is always in the lab, and works a lot on robotics at home.

We’re always looking for new potential sponsors to our team, and for adult mentors (know any engineers?) who would be willing to come, learn, then help us. If you would like to visit our lab next to Court 4, we are working there every day after school. If you would like information so you can watch the livestream from a competition—either for your own interest, or to show your students in class—please email Marc Shapiro at mshapiro@moundsparkacademy.org.